HELPING MY HERO TO SAVE MY SON!

Many of my friends and relatives know that my only son, Anthony Achariya Chhim (“Tony”), needs a kidney transplant. Tony’s kidneys had lost all functions in 2010 for some unknown reasons. His doctor did not want to perform a biopsy, a test to find out the cause of his kidney failure, as it could be fatal.
Since a person only needs one kidney to survive, my wife—his mother Neang—who has the same rare blood type “O”, without any hesitation, gave one of her kidneys to save his life. Neang’s kidney, however, only lasted for five years. In 2015, after many difficulties, Tony’s body finally rejected her kidney completely. He has been on regular dialysis treatments ever since. He spends three times a week, for up to five hours at a time at the dialysis center. It is an exhausting and painful process for him. It devastates me to watch my son suffers. Though the dialysis does the job of keeping him alive, but a transplant would offer him the ability to live a longer, healthier, and more normal life. It would allow him to follow his big dream, return to his passion of creating video games and to run his company called Quantum Imagination Studios. A new and functional kidney would also give him free time with his family and friends, something many of us take for granted.

According to the United Network of Organ Sharing (UNOS), over 93,000 people are on the waiting list for a kidney transplant. It is a one in millionth chance to receive this precious gift of life. His mother and I had been working tirelessly to find a new donor. As parents, we would do anything, by ethical and legal means, for our children. It reminds me so much of my own parents and siblings who made big sacrifices for me.

As a peasant from Prey Khmer of Kampong Chhnang, Cambodia, I lived in a harsh environment where my parents, who had me at an old age, struggled to survive and provide education and food for our family of seven: my parents, my four older sisters, and me. The one thing that kept them going, as they spent twelve to thirteen hours a day doing backbreaking labor of rice cultivation in our farmland, was me. They genuinely believed their only son would be somebody great one day. With that dream, they sold their lands to pay for my education and worked on what little they had to feed the family and me. My four sisters gave up their education so that my parents had enough to pay for my education and food while I was away from home.

In 1970 war finally struck Cambodia. Ideologies of capitalism and communism clashed amongst my countrymen and families. When the victors won, they gathered leaders, soldiers, civil servants, students and anyone who the communists perceived as their archenemies to be executed. I was among them. They led us to believe they were taking us back to Phnom Penh to help rebuild the country. As I sat with seventy or so others in the drizzling rain listening to their group leader speak, I recounted the people I met and the demeanor of the communists. Then insight and clarity set in. They were taking us to be executed. I thought long and hard about my father and mother who gave up so much in life to see me educated and become someone great. I could not let them down. I had to survive. I looked at the soldiers with their AK-47 guns. My eyes scoured my surrounding for a quick exit. Based on my calculation I had a 1% chance of surviving and 99% chance being captured or shot. I could not allow someone to take my life just like that. I took the 1% chance. I made it to safety until I was caught two more times and slated for execution both times. My will to survive remained strong. That’s why I would never give up on my son, or any of my children, for that matter. 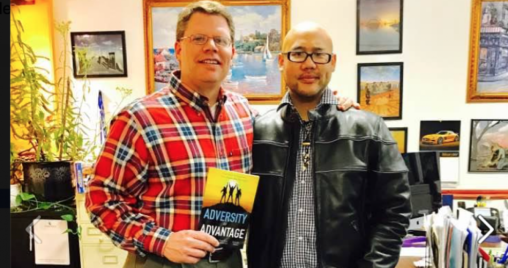 After years of searching and calling for friends and strangers alike for help, like godsend, a very good friend, Taylor Tagg, has got his blood tested and lo and behold, everything is a match! Our savior had been with us all along. There was a reason he came into our lives. Taylor is now in the process of donating one of his kidneys to Tony. My family and I are over the moon. Thinking about it brings us tears of joy. We are grateful to him for making such a big sacrifice for Tony and to his family for supporting his selfless decision.
I am so touched by his sacrifice that, when we personally met in New York last month, I asked him, “Why do you decide to do this, Taylor?”
He said, “You are my hero, Tim.”
He shocked me. I couldn’t say another word but responded in kind that it was the other way around—Taylor is my hero. Yes, Taylor is the bravest man I’ve ever met. Who, among us, as strangers, would give one of our organs—a part of our body—to save another human being? I went on to ask Taylor about the support of his wife Sherri, his mother and father. He told me that everyone he spoke with supported him. I was overwhelmed and could hardly utter any more words.

As happy as we are, we are not out of the woods yet. We may have a donor but we are short on funds to cover our hero’s traveling, lodging and recovery expenses. Taylor and his family will be traveling and staying in New York for a few weeks. We are expecting the expenses to be more than $10,000 and we are pledging that the unused money will be donated to a Kidney Foundation or a not-for-profit organization on behalf of the donor and Tony.

We don’t like to burden our friends and strangers alike, but we are in desperate need of your help to save our son and we want to make our donor and his family as safe and as comfortable as possible. After all, he makes the biggest sacrifice of his life for us. Can we count on you to help fund these expenses?

Thank you for taking the time to read this. We appreciate any amount you can contribute. You may help by donating through this website: “Giveforward” https://www.youcaring.com/anthonyachhim-794666

You may send your contribution to Timothy Chhim 21 Riverglen Drive, Thiells, NY 10984 or you can send it via my PayPal account at Timothychhim@aol.com.

If you would like to speak with me for any additional information please email me at timothychhim@aol.com or call me at 845-642-3232.

God bless you and your family.

Looking forward to having a new kidney and new life…

A NEW KIDNEY PROMISES A NEW LIFE!
FOR THE WORLD: PLEASE READ AND WATCH THIS LINK! CLICK IT!
FOR MY FRIENDS IN ROCKLAND/WESTCHESTER (LOHUD) AREAS, THE STORY WILL BE ON THE PAPERS TOMORROW! April 28, 2017