Timothy Chhim is a motivational speaker, best-selling author, Napoleon Hill Foundation Certified Instructor and licensee. He is the owner of an Allstate Insurance Agency in Nanuet, New York. He was born into an impoverish family in Kampong Chhnang, Cambodia. From a young age he has always dreamed of freedom and strived for a better life for himself and his countrymen. Tragically, the Vietnam War spread into Cambodia, forcing its leaders to take sides and the people to be divided. The battle between communism and capitalism raged on from 1970 to 1975. Devastatingly, the former won. Timothy became one of the millions of people who were forced out of Cambodia’s capital at gunpoint by the Khmer Rouge on April 17, 1975. After several screening processes, Timothy was singled out as an educated citizen and as a Khmer Republic official. He was slated to be executed in the jungle among more than 70 people.

Timothy’s old picture from the 60’s

Timothy’s desire for freedom emboldened him. Believing in his destiny to achieve greatness for his family and countrymen, as foretold by a seer, he decided to escape the Khmer Rouge’s death row by jumping out, zigzagging, and dodging many rounds of bullets to make his way toward the dense forest. Timothy escaped his execution two more times before he journeyed for a few weeks through the jungle that teemed with human predators, dangerous animals and landmines. He finally reached Thailand on August 18, 1975—4 months after his evacuation from Phnom Penh. 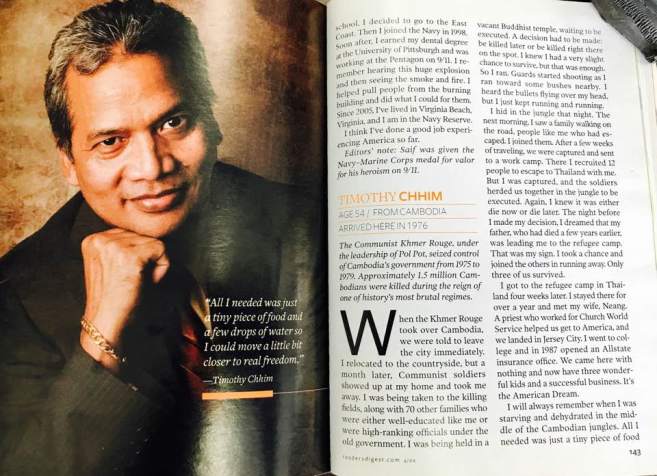